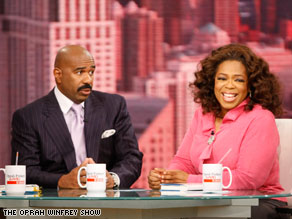 This was shared with me by Aminata Kamara , so have a glance , food for thought…

This is a very interesting except from the promotion of Steve Harvey’s book ‘Act Like A Lady, Think Like A Man’, Oprah’s 2/27/9 show, where he was a 15-minute guest. He said the book is the only thing he initially did for free, as a gift to women. He did not expect in his wildest dreams that it would make the ‘best-seller’ list.

« Every man has a plan. A man does not lock eyes with you from across the room or approach you just to talk, he has a plan. He saw something he wants. This attempt at conversation is to find out how much it will cost him. It is not only about money, but other things like how much time must be invested, what does she want from me, what are her standards. Because men will rise to the occasion, no matter how high the bar is set, it’s just that women keep lowering the bar, lowering their standards. Women are complicated, they keep talking to each other, but men are very simple. Men need only three things: support, loyalty and the cookie. » He says if a man introduces you as his friend or just says your name,
with no title – you have nothing. Men are very protective, they mark their territory. If a man loves you, he’s willing to profess it. After a while, he’ll give you a title – his woman, his lady, his fiancé, his baby mama, some title. If after three months he is still introducing you by your name only, you have nothing. The man who truly has feelings for you will give you a title. This is his way of letting everyone within the sound of his voice know he is proud of being with you and he has plans for you.

Every man has a plan. He tells of one the times his father-in-law was visiting and interrogated the boyfriend of one of his twins. They had dated four or five times and he asks what are his plan for his
granddaughter. After stumbling and stuttering, he finally mumbles out that they are just kicking it. So Steve says, that’s cool. Let’s just bring my daughter in now and inform her that she is just being
« kicked » – that you two are just « kicking it » and let’s see if that’s what she just wants to do. They broke up the next day.

Steve says men are fishermen, either for sport or for food. Women must determine which kind of fish they want to be. If you don’t want to be continuously hooked and thrown back, just for sport, you must present your standards, you must stop lowering them, you must present your requirements. Then if you are hooked, the man knows you are about business. In other words, when you’re hooked, he must know that you are eventually going home with him, not back into the water. It is the woman that is in control – of everything.

A woman SKYPE’s in via satellite with a question for Steve: « When should a woman have sex the first time in a new relationship? » Steve cites, as an example, when he once worked on the assembly line at Ford Motor Co., where there was a probation period for new employees. Like a lot of large companies, only after 90 days do you qualify for a benefit package – before allowed to get dental, medical, get my eyes checked. Within those days I was being checked out – whether I was easy to get along with, to work with, whether I was reliable, showing up on time, if I was worthy. Then, and only then, do you get the benefits. Why do women, who possess the greatest benefits package of all, pass it out so quickly to unworthy guys? Slow down ladies, you cannot run us off, if we want you!

And know that men are aware of the fact that you change the rules – when you are desperate, when you think there is a shortage of good men out there. And we play on it. We created terms like ‘gold digger’ so you don’t ask for money; the term ‘nagging’, so that you don’t badger us. We created these terms so that you will require less of us. God has given all women this incredible gift called intuition. Get in a guy’s face, look in his eyes, use that intuition! ‘Old School’ is not dead, chivalry is not dead, it is just not being required anymore